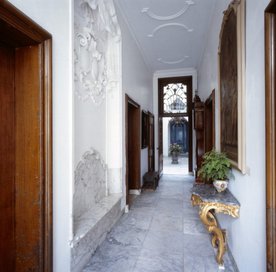 The house originally dates from the 16th century, from shortly after the Great Fire of Delft in 1536. In this period, the Koornmarkt became one of the wealthiest areas of the city. Various renovations were carried out on the house in the ensuing centuries, including a new front façade and extensive modernisation around the year 1800. This is the house that Tetar van Elven bought in 1864. He carried out no further renovations himself, but adapted the interiors to the current fashion. His most striking addition is the ceiling in the Salon: he commissioned Abraham Gips (Dutch painter, 1861-1943) to decorate it with the names of the old masters that he admired and copied (Raphaël, Rubens, Rembrandt and others).

Around 1930 the house was adapted to make it suitable for its new purpose as a museum. The current layout is therefore not exactly the same as in Tetar’s time. 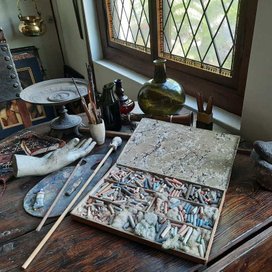 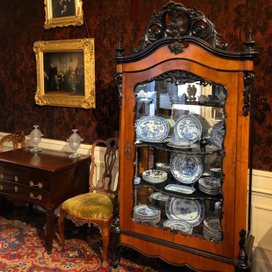 That was the description by Paul Tetar van Elven of the inventory of his house on the Koornmarkt – and which was to form the display collection of the future museum.

Visitors to the museum can see that Tetar’s wishes have been fulfilled – from the richly-decorated and -furnished living rooms to the portraits and other paintings by himself and his contemporaries, to the remarkable painted ceiling, to the studio with his personal possessions, and to the library with his collection of antique books.

And on top of all that there are also the cabinets with his extensive collection of pottery and porcelain! 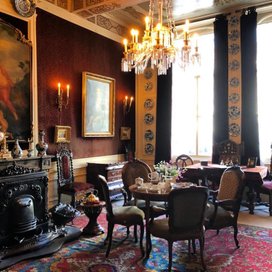 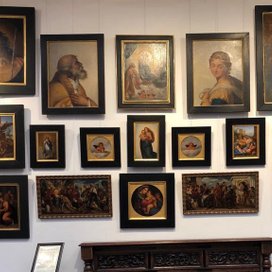 The paintings on display in the museum are mainly by Tetar himself, in particular the portraits of his family and his copies of old masters. Some works of his contemporaries are also on display, such as paintings by Koekkoek, Leickert, Immerzeel, Adriana Haenen, his half-brother Jean Baptiste Tetar van Elven, and Jean Bapstiste’s son, Pierre.

Tetar van Elven also had a few 17th century works in his collection, such as a farming scene by Pieter de Bloot, a grisaille by Adriaan van der Venne and a large “pen painting” seascape by Witmondt. In Tetar’s studio hangs the enormous canvas named, “The wife and the mother of Reinier van Oldenbarnevelt plead for mercy with Prince Maurits in 1623”. This is a typical example of 19th century historical genre painting, where heroic and dramatic scenes from Dutch history are depicted. 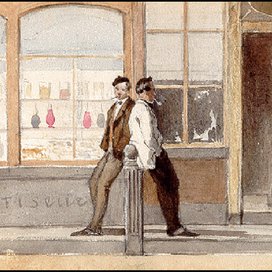 Tetar reveals himself as a master in his studies, drawings and watercolours. His sketchbooks are on display, with extremely skilful portraits of family and friends, and deft sketches of everyday life. 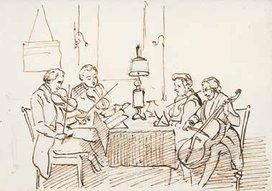 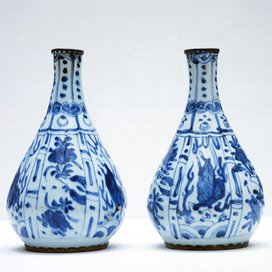 In the attic, many more items from the collection can be seen in the cabinets. Access to this floor is via the original 16th century spiral staircase, complete with Delft blue wall tiles, depicting children’s games. 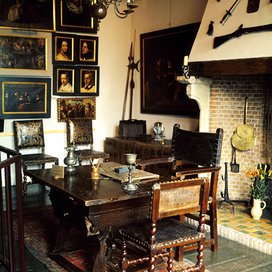 In the 19th century, furniture and items from the 17th century (the so-called Dutch Renaissance style) were very much in fashion. This trend is evident in the museum, for example the gold leather chairs and the money changer’s table in Tetar’s studio. The antique weapons in the studio were used as study objects, as can be seen in the historical painting next to the fireplace. 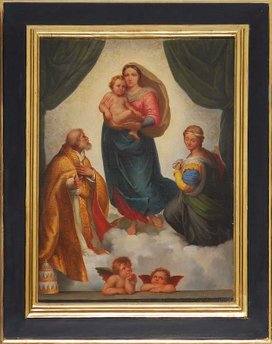 Have you ever wanted to stand right in front of Raphaël’s “Sistine Madonna”, with its legendary angels? Or look into the eyes of Rembrandt’s “Portrait of an Elderly Man”? This is all possible in the museum, thanks to the copies that Paul Tetar van Elven made of oil paintings by old masters.

Copying famous paintings was an integral part of artistic training in the 19th century. Like many of his contemporaries, Tetar visited the great art galleries, both at home and abroad, to observe and copy works of his famous predecessors. This copies were used as aide-memoires by the likes of Tetar, once back home in their studios. But, these copies also fulfilled another function: to supply the growing market among art-lovers. Many people yearned to hang a famous painting on their wall, but “the real thing” was beyond their means. In the era before photography, what better substitute than a true copy? For many artists, selling copies was a welcome source of income.

Tetar’s copies sold like hot cakes, and especially the eternally popular “Sistine Madonna” by Raphaël! In the 20th century, making hand copies was no longer necessary, and it was no longer deemed as art. Most traces of this specifically 19th century practice have been wiped out, but, luckily, the copies that Tetar did not sell have been preserved, and now give us an insight into that world. 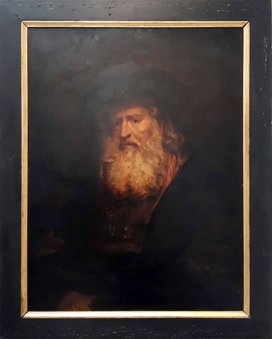